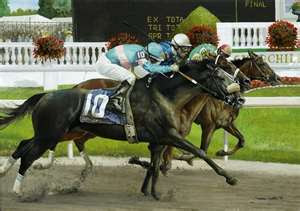 Can it honestly already be six years since Giacomo (pictured) won the Kentucky Derby at odds of 50-1 for the now-familiar connections (through Zenyatta) of The Mosses, John Shirreffs, and Mike Smith? This 2005 Derby was really the first time that grouping of owner, trainer, and jockey really burst onto the national scene.


That 2005 Derby was very similar to this year's edition in that it was so wide open. Bellamy Road was considered the prohibitive favorite, based on his smashing win in the Wood Memorial at Aqueduct. Bellamy Road's trainer, Nick Zito, had five horses in the twenty horse field. Zito also sent Noble Causeway, Andromeda's Hero, High Fly, and Sun King to the post at Churchill Downs. Afleet Alex was also well-fancied (and would prove to be easily the best horse of the class by winning The Preakness and The Belmont Stakes) with young Jeremy Rose in the irons. The upset winner of the 2004 Breeders' Cup Juvenile, Wilko, was part of the proceedings. Spanish Chestnut, who would set the dazzling pace, was in the field also, so you knew who would be up front.


The horse that actually ran the best race of the day was Closing Argument, who would get caught at the wire by Giacomo. Closing Argument would have to settle for second at odds of 71-1. Closing Argument was up close to the quick pace most of the way around and seemed to have enough left through the stretch to win. I must admit I still get goosebumps when I listen to Tom Durkin's call of this Derby and he says, "Closing Argument in with a chance" during the stretch drive was complete incredulity that the longshot was still right there.

Giacomo sat well back off the 22.28 quarter and the 45.38 half-mile fractions in eighteenth place. By the time Smith had him in motion, the pacesetters were starting to fall apart. Spanish Chestnut would finish sixteenth, Going Wild would finish eighteenth, and Bandini would finish nineteenth. Meanwhile, Closing Argument had taken the lead and had Afleet Alex bearing down on him on the inside and Giacomo moving up on the outside. The three horses came through the lane in a pulsating stretch drive that resulted with Giacomo in front by a half-length, Closing Argument second by the same margin, and Afleet Alex in third place. Giacomo paid $102.60 to win on Derby Day and Closing Argument paid $70 to place.

I look back on this Derby with mixed feelings. I did have win money on Giacomo that day. My $5 win ticket turned into $250. However, I had posted on a horse racing forum that week that the two best longshots in the race were Giacomo and Closing Argument. Guess who didn't have a ticket on the exacta that paid $9,814.80? Yeah, that one stung for a while, but I did totally luck into the Mine That Bird-Pioneerof The Nile two years ago for nearly $2,100, so I can't complain too much about it. After all, I still left the track on Derby Day 2005 a winner.

Tune in again tomorrow for more from They Are Off. For right now, I am Gone... GOODBYE!

Photo courtesy of horsehats.com
Posted by Michael Chamberlain at 2:20 PM

Nice story..thanks for sharing! Still a great exacta score with Mine that bird, even if you missed the Giacomo one..