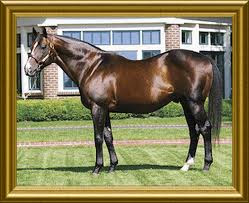 The end of the line has come for the stud career of one of the greats, A.P. Indy (pictured). He has been pensioned at Lane's End Farm due to apparent infertility. A.P. Indy sired so many wonderful horses during his stud career that one wonders where to start. One of his offspring, Bernardini, won the 2006 Preakness and was the first choice to mate with the great Zenyatta. Unfortunately, the first attempt at impregnating the Grande Dame did not go so well, but there will be a second try, thankfully.

A.P. Indy also sired many other great runners including Pulpit, Stephen Got Even, Aptitude, Friends Lake, Suave, Mineshaft and Old Trieste. His legacy could likely equal that of Storm Cat, another of the great recent Sires. A.P. Indy was the leading North American Sire in 2003 and 2006. I don't think he quite gets into the discussion with Northern Dancer, but then again, who does really?

A.P. Indy was touched by greatness right from the start. His Sire was 1977 Triple Crown winner, Seattle Slew. A.P. Indy was Horse Of The Year and Champion Three-Year-Old Colt in 1992, following his wins in the Santa Anita Derby, Belmont Stakes, and Breeders' Cup Classic. He would probably have won the 1992 Kentucky Derby as well, but as the morning-line favorite, he was scratched on the morning of the race by trainer Neil Drysdale after a foot bruise. While that was unfortunate, it did clear the way for the great Pat Day to get his elusive Derby win with Lil E. Tee. Drysdale would eventually get to the Derby Winner's Circle with Fusaichi Pegasus in 2000. For his impressive racing career, A.P. Indy would go to the post eleven times, winning eight and finishing third in one other start. He earned a total of $2,979,815 in purse money.

A.P. Indy now gets to enjoy his dotage and retirement like any great one should, resting and relaxing, hopefully he somehow knows what an impact he had both on and off the racetrack. Here is the link to watch A.P. Indy win the 1992 Breeders' Cup Classic: http://www.youtube.com/watch?v=rZnLjV2xVFo. Tune in again tomorrow for more from They Are Off. For right now, I am Gone... GOODBYE!

Photo courtesy of chef-de-race.com
Posted by Michael Chamberlain at 8:46 PM