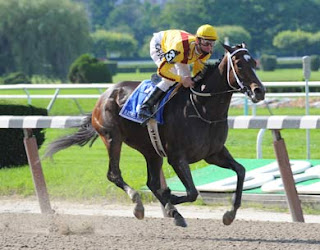 Rachel Alexandra did it again on Saturday. She completely dominated her own sex and won the Grade 1 $300,000 Mother Goose at Belmont by 19 1/4 lengths. Granted, she only faced two other horses, but she also set a Stakes record time of 1:46.33. That is just a second of the track record for the distance. That was set by none other than Secretariat in September 1973. I think that this is simply further endorsement that Rachel Alexandra is the best horse in training right now. That's male, female, younger, older, whatever... she is the best and I, for one, can't wait to see what she does next.

The other top female runner in the country, Zenyatta, also was a winner this weekend in the Grade 1 $287,000 Vanity. She was not quite as dominant as Rachel Alexandra, but she did push her perfect record to eleven straight wins. That's pretty darn dominant, if you ask me.

Zenyatta's connections say that they want to come east to run against Rachel Alexandra later this year, but for right now, Zenyatta's next race is expected to the Clement Hirsch at Del Mar on August 9. After that, who knows? Hopefully, they will be able to find a spot to run against Rachel Alexandra because that would be one horse racing event that might just live up to the hype, if those two managed to get on the track against each other. It likely won't happen in the Breeders' Cup since Rachel Alexandra's connections are not anxious to have her run on a synthetic surface. It also would be good if we didn't have to wait that long. The sooner that they can face each other, the better for everyone it would be.

Tune in tomorrow for more from They Are Off. For right now, I am Gone... GOODBYE!

Photo courtesy of thoroughbredtimes.com
Posted by Michael Chamberlain at 3:45 PM

Probably a pipe dream, but I think they could probably run 1-2 in the JCGC this fall.