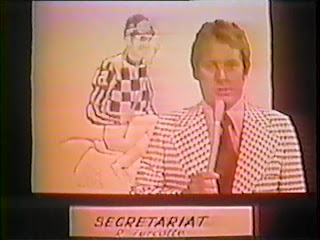 The man in the picture to the left is the greatest race caller of all-time, Chic Anderson. Anderson worked for many of the top racetracks in the country including Oaklawn, Churchill Downs, and the NYRA tracks. He also called the Triple Crown races on CBS (and a couple on ABC) for the greatest decade in horse racing history, the 1970s. Anderson was able to describe the action for three separate Triple Crowns (Secretariat, Seattle Slew, and Affirmed). It is, of course, for his work in 1973 with Secretariat's crown that Anderson is best remembered.
With the Belmont Stakes this weekend, the Secretariat Belmont (in which he won the race by 31 lengths and ran the 1 1/2 mile distance in a world record 2:24) is even more prominent. Maybe not as much as a year when a Triple Crown is up for grabs, but still you cannot ignore the greatest race performance of all-time when the Belmont is coming. Secretariat became the first Triple Crown winner in 25 years (since Citation) with his victory.
Anderson's most famous line from the 1973 Belmont race call is "He is moving like a tremendous machine!" Any horse racing fan, either from that era or this, cannot help but get the chills when Anderson intones that line. Another personal favorite of mine is at the top of the stretch, when Anderson says "He's out there almost a sixteenth of a mile away from the rest of the horses!" If you have considered that a sixteenth of a mile is 110 yards, then you know why Anderson got so justifiably excited.
The 1973 Belmont Stakes was one of those perfect storms when man, horse, and moment met and the result was history. You had the greatest racehorse of all-time and the greatest announcer of all-time at the top of their games and the end result became immortal.
If you would like to see the 1973 Belmont Stakes, you can go to http://www.youtube.com/watch?v=xoFquax2F-k. Tune in tomorrow for more from They Are Off. For right now, I am Gone...GOODBYE!
Posted by Michael Chamberlain at 3:40 PM

One of the best, no doubt. Chic's coat and the yellow pants, maybe?