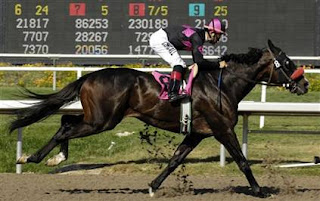 The ill-fated and ill-conceived comeback of Lava Man came to an end today when the gelding was retired by his connections following his last place finish in the Grade 2 San Gabriel at Santa Anita. Lava Man returned to the races following stem-cell therapy to repair his ankle. The move to return him to racing was considered controversial from the get-go because of his age, physical condition, and the amount of time he had been away from the races. Lava Man had been retired since the Grade 1 Eddie Read at Del Mar in summer 2008.

While everyone may have had the best of intentions with Lava Man to try and bring him back, it is unfortunate that our last image of him on the track will be a last-place finish in a race poorly suited to his talents. The story of him rising from the claiming ranks in California to a multiple Grade 1 winner will forever live in the hearts of racing fans not only in the Golden State, but to any true fan of the sport. It is not often that a horse can go from one extreme of the game to the other like that and his win in the 2007 Hollywood Gold Cup will forever be punctuated by the great call of Vic Stauffer, when he called him "the original Rags To Riches" in the wake of the so-named filly's win in the Belmont Stakes. If you would like to watch the this epic performance, here is the link: http://www.youtube.com/watch?v=wBj_fpKTrAY.

Tune in again tomorrow for more from They Are Off. For right now, I am Gone... GOODBYE!
Photo courtesy of nbcsports.msnbc.com
Posted by Michael Chamberlain at 5:28 PM