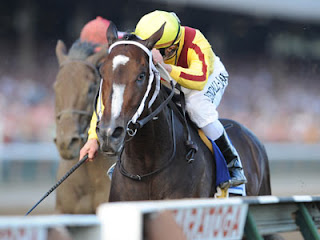 Just in case anyone out there had any doubts that Rachel Alexandra was the Horse Of The Year this year, I certainly hope that you have had those issues squelched by her amazing performance against older males in this past weekend's Grade 1 Woodward Stakes at Saratoga. There is quite a bit to recall from Saturday's victory, so let's have at it, shall we?

First of all, Rachel Alexandra won that race by setting a relatively quick pace and fending off impressive runs from closers Bullsbay and Macho Again. Honestly, she went 22.4 for the opening quarter and 46.2 for the half. When you are going nine furlongs, that is some speedy stuff. If you take a look at the replay of the race, the horses that pressed the pace with her, Da'Tara and Past The Point were nowhere to be found at the end. While Da'Tara has not managed to win a single race since the win in the 2008 Belmont Stakes, he still has that signature win and is certainly not a slouch. She drilled him into the ground and was able to continue on to the finish.

The best part of all this, to me, was that while I was watching the race with friends Nick Tammaro and Pat Cummings, we all noticed that Calvin Borel had not even asked her until he produced the whip at the top of the stretch when the challenges from Bullsbay and Macho Again started. For a fleeting moment, I actually thought she might get beat by Macho Again, but right at the end of that race, you could see that she just wasn't going to let anyone past her to win, it just wasn't going to happen.

The aftermath of all of this is that she should be a UNANIMOUS choice for Horse Of The Year. Her connections should be getting Eclipse Awards from now until the cows come home, Steve Asmussen and Calvin Borel have both done remarkable jobs with the filly since taking the reins (no pun intended). Obviously, Borel has been with her a bit longer than Asmussen, but they have been perfect with her and they have had her in easy spots (The Mother Goose) and difficult ones (The Preakness, The Haskell, and The Woodward).

Will she ever run again? Owner Jess Jackson hinted that Saturday might have ended her season and if she never steps foot on the track again, it will be our loss. However, she has now done it all. She dominated her own kind (fillies), won a Triple Crown race against three-year-old boys, defeated the boys again over a quagmire in the Haskell at Monmouth, and now beat older males at the "Graveyard Of Favorites". What else does she have to do? Beat Zenyatta? Sorry, but that is an unnecessary thing, folks. She would crush Zenyatta in much the same way Mike Tyson crushed Michael Spinks. It wouldn't even be a fair fight.

In the final analysis (and my opinion), this is the greatest horse to set foot on a racetrack since Secretariat. If Jackson decides to retire her right now and breed her to Curlin, I will certainly be the first in line to wager on that offspring in a few years and get back $2.10 for my $2 win ticket. I'll love having the souvenir.

Photo courtesy of thoroughbredtimes.com and NYRA.
Posted by Michael Chamberlain at 7:08 AM