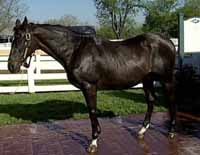 One of my all-time favorite Kentucky Derby winners is Bold Forbes. The 1976 winner defeated less than even-money favorite, Honest Pleasure, with a front-running score at odds of 3-1.

This has got to go down as one of the greatest training jobs in Derby history by Laz Barrera. Barrera knew that his horse was a sprinting specialist that had dominated racing in Puerto Rico, having won seven of eight races as a two-year-old. Barrera worked his horse until he learned how not to go all-out from the get-go and how to conserve some energy for the distance he would face in the Derby. After a half-mile at Churchill, Bold Forbes had a five-length lead. Once the field hit the stretch, Honest Pleasure had cut the lead to less than a length and most observers felt that the favorite was going to blow on by. It was at this point that the training that Barrera had done came into effect and Bold Forbes had enough left to protect his lead and win the Roses by a length.

The ride given Bold Forbes by Angel Cordero was also a thing of beauty. He rode the horse to that large lead and six furlongs in a time of 1:10.2. He and Barrera had a gameplan and he stuck to it all the way around the track and earned the second of his three Derby triumphs (the others coming on Cannonade in 1974 and Spend A Buck in 1985, another front-running win).

Bold Forbes isn't in the Hall Of Fame yet, but he was the Champion Three-Year-Old in 1976. Bold Forbes hit the board in all eighteen of his lifetime starts with thirteen wins, one second, and four thirds. Tune in tomorrow for more from They Are Off. For right now, I am Gone...GOODBYE!

Posted by Michael Chamberlain at 3:01 PM

The thoroughbred hall of fame is screwy. Besides the fact that there is no place in it for the media, including writers, television personalities, and of course the men on the mike, the system for induction is just awful. Only one male and female horse a year? That is ridiculous. Each year, there are champion sprinters, turf horses, juveniles, distance horses, etc. And most of those will never sniff the hall. Favorite Trick will never get in the hall despite being quite possibly the greatest two-year old since Native Dancer in 1952. Bogus.